Per the current CDC guidelines we are requiring masks to be worn when you are inside and away from your table.  We have masks available.  Thank you in advance for your understanding.

Skunk Ruckus with opener Call the Next Witness 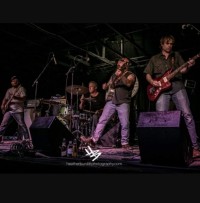 Hailing from the mountains of Western North Carolina, Skunk Ruckus combines elements of old time banjo tunes and punk rock into a distinctly new sound they call Hillbilly Gutrock. Bandleader Jim McCarthy’s writes his songs of heartache and belligerence on clawhammer banjo, but his band uses electric instruments to expand the deceptively simple songs into sonic territories of discovery. Steeped in the long traditions of Appalachian fiddle and banjo styles, Skunk Ruckus brings both poignant songwriting and instrumental bombast in ways that update and transcend much of their source material. The goal is not so much to bend established genres or to create new forms of musical fusion. Rather Skunk Ruckus embraces a wide world of influences and is not afraid to live in a world where Charlie Poole might hang out with The Cramps.

Although Jim McCarthy has been writing songs about, as one reviewer noted, “murder and booze [and] boozy murder,” alongside bassist Max Steel for years, the band has only recently solidified into a rock quartet with the addition of Dave Gilbert on electric guitars and Claude Coleman Jr. on drums. Dr. Dave, as he is known, adds skronk and gravity with his various stylings of electric guitar, while drummer Claude Coleman recently came on board to record the band’s second full-length album and plans to make all the gigs he can in-between his longtime commitments to Ween (with whom he has played since 1993), Mike Dillon, and TV Tramps.

Skunk Ruckus tours regionally and nationally, often cutting up and down I-81 between Knoxville and Philadelphia. When not roaming the corridor, they also play circuits along the East Carolinas and Georgia. They’ve played and toured with Jim Avett, Southern Culture on the Skids, The Goddamn Gallows, Sawyer Family, JD Pinkus,The Legendary Shack Shakers, Tall Tall Trees, The Ford Theater Reunion, Bob Log lll, Pierce Edens and The Dirty Works, Qiet,  and Cut Throat Shamrock, among many others. They have also been featured at the Popcorn Sutton Memorial Jam in Western N.C. and Brandywine Folkfest in P.A., and North Charlestson’s annual Rockabillaque.

Call the Next Witness

Call The Next Witness is a three piece rock’n’roll group from Asheville, North Carolina. The band’s sound incorporates elements of garage, punk, and alternative with influences that include The Clash, Queens of the Stoneage,and Pixies.  Their music is a high-energy, earnest romp with songs that smolder and snarl.

The band had an initial run from 2014 to 2017 playing several Asheville and regional clubs.  In the summer of 2019 the band re-formed with original bass guitarist Maxxx Steel (Skunk Ruckus) and guitarist/songwriter Liam McKay (Father Is Lost) joining forces with Kelly Minnis (The Ex-Optimists) on drums.  Their debut EP titled Monsters came out in 2020.  It is available on their bandcamp page at www.callthenextwitness.bandcamp.com.

The single “Watch It Shine” has received airplay on Asheville FM 103.3 and Buzz Radio Asheville.  The song recently charted at #8 on the September 26, 2021 Buzz Radio Asheville Top 20 Request Countdown.  Call The Next Witness are excited to make their first visit to 185 King Street on January 29, 2022.