Sideline was formed in 2012 as a “jam band” for a group of friends that played professionally in other bands. They started playing together as a fun alternative when their bands were not performing. In a short time they discovered their own identity and style, and realized their tour schedule was getting full. They decided to take a leap of faith and commit to the group full time. The band was named “Sideline” by founding member Darrell Webb, due to its origin as a “side band”. Sideline has had different configurations over the years, but the two other founding members Steve Dilling and Skip Cherryholmes led the band through it all.

In just under a decade Sideline has achieved a list of musical accolades. The song “Thunder Dan” not only held the #1 spot on the charts for multiple weeks, as well as the #1 song for the entire year 2018, it also won the 2019 Song of the Year award with the International Bluegrass Music Association. Sideline has had many chart-active/chart-topping hits, including, “Just A Guy In A Bar”, “I’ll Always Be A Gypsy”, and “Jesse’s Barn” from the group’s latest album release “Ups, Downs and No Name Towns”. Both in title and in musical performance, this album reflects the band’s obstacle-ridden journey, while also acknowledging the recent struggle of the music industry — and especially its professional touring musicians — to cope with a months-long, pandemic-driven shutdown. The song “Old Guitar Case” (lyrical inspiration for the album title) delivers a depiction of the details of a road musician’s life, revealing profound truths about journeys of hardship and triumphs, victories and defeats — all undertaken with the aim of reaching new heights as the music and the community it builds continue to grow. 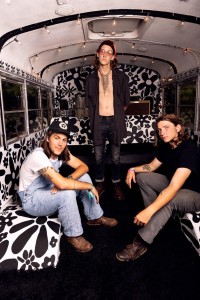 Palmyra and The Pinkerton Raid